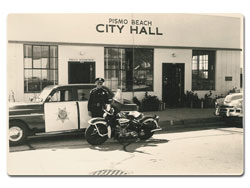 Chumash Indians occupied the Pismo Beach area at least 9000 years ago, according to local historians. They referred to Pismo as a place to find "pismu", or tar, which later evolved into the name of this coastal community.

The City of Pismo Beach is located on portions of a 7000 acre ranch which was awarded to Jose Ortega in a Mexican Land Grant in 1846. Ortega sold the ranch to Isaac J. Sparks who was the owner of Rancho Huasna, south of Arroyo Grande. In 1848 the property, known as Rancho El Pismo, was sold to John M. Price.

John Price was a well respected man of the community and was appointed as the "Alcalde" in 1848, a combination of judge and peace officer under Mexican law. His ranch was south of the city in a canyon which now bears his name. Remnants of the original adobe and later two story house are still visible on the property.

Mr. Price had the area subdivided into the town of "El Pismo" in 1886. It was further subdivided a year later and recorded as the "Town of El Pizmo". Tourists were brought into the community by train when the Southern Pacific Railroad reached Pismo in 1895 which greatly impacted the local economy.

The name of the community was changed from Pismo to Pismo Beach in 1923. The addition of "Beach" to the official post office name was surely done for its promotional value. A new pleasure pier was dedicated the following year as an added tourist attraction.

Several unsuccessful attempts were made to incorporate Pismo Beach as a city. The supporters of incorporation were able to get the issue on the ballot, but were defeated in the 1926 and the 1935 elections.

The city or Pismo Beach was finally incorporated on January 11, 1939. A vote desiring incorporation was won by seven votes with 205 for incorporation and 198 against. However, the battle was still not over. A ballot initiative brought the issue back before the voters to decide whether to retain incorporation.

Mr. Frank P. McCaslin was the first chief of police for the newly incorporated city. He resigned effective August 8, 1939 to return to a previously held position with the Santa Maria Police Department. McCaslin was highly respected officer and left to receive a higher salary. Officer L.D. Willey was then appointed as interim chief. 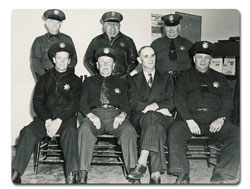 The salaries for the officers were paid for primarily through the City Fire District as the city general fund was not sufficient to support the personnel on staff. This made the administration of the new department very awkward as the officers were under the direction of the chief who reported to the local Board of Fire Commissions.

With the disincorporation of the City of Pismo Beach, law enforcement was returned to the responsibility of Sheriff Hathway and his deputies. Their job became very difficult during the war years due to the influx of soldiers into the beach community for rest and relaxation. Unfortunately, gambling and the excessive consumption of alcohol were often the chosen form of "R & R".

The City of Pismo Beach was again incorporated on April 25, 1946 after another vote was held with 245 for and 216 against.

The first chief for the reformed police department was Amos Dana. He was a former deputy sheriff who lived at 540 Harlow Street with his wife and four children.

The first police station was located at the corner of Dolliver and Hinds where they shared space with the sheriff's department sub-station.  Guido Santini became the city's first motorcycle officer in 1947. He came to Pismo Beach after four years of service with the

Santa Maria Police Department. Santini paid $850 for a new red Harley-Davidson that he used to patrol the streets of Pismo Beach. Although the city did not own the motorcycle, they did have it painted a more traditional black. Santini left the police department on January 15, 1951.. The city bought his motorcycle which was driven by several other officers before eliminating the program. The city functioned without motorcycles for many years. On April 27, 1989 another Harley-Davidson was purchased by the city and used by Officer Gary Williams. 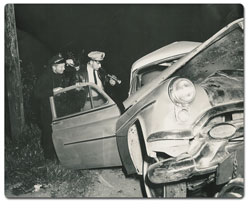 Assistant Chief of Police Rex Erlewine died on June 1, 1952 during the Elk's Rodeo at the Santa Maria Fairgrounds. Erlewine was standing near the grandstand area when a frightened horse broke free from the fence it was tied to. The accounts of the incident vary, but the officer was either struck in the head by the fence board or stepped on by the horse.

Communications become a major issue in 1951. The California Highway Patrol gave notice that they would no longer transmit radio messages for local law enforcement agencies. Chief Dana suggested to the city council that a radio system be purchased and shared between Pismo Beach and Arroyo Grande for a cost of about $2000. Ultimately, the council followed the chief's recommendation and a radio was put into the city's police car.

The police station was moved during the 1950's to its current location on Bello Street. The police department occupied several different locations within the former school house which had been abandoned for failing to meet earthquake standards.

As experienced by most growing communities during the post-war years, traffic problems became one of the major concerns of the police department in the 1950's. Construction of the new freeway began after Christmas 1959, and was completed in April 1961. Madonna Construction had been awarded $1.5 million to build that section of the freeway.

Prior to the freeway, the main traffic route went along Price Street which was lined with motels, cafes and other businesses. Even though it was a four-lane road, parking on both sides of the street and steady flow of cars created a lot of congestion. 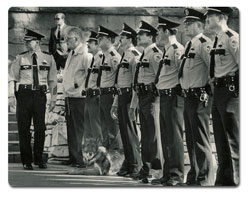 Shell Beach was annexed into the city of Pismo Beach in 1964. The city continued to grow in 1970 with the annexation of the Sunset Palisades area.

A "near riot" was declared after the fireworks show on July 4, 1971. About 500 people remained in the downtown area near Cypress and Pomeroy after the show. Officers attempted to make arrests for disturbing the peace as fights began to erupt. Three officers were attacked by the mob resulting in two minor and one serious injury. Officer Jim Branin was hospitalized at Sierra Vista after his baton was taken from him by the crowd. His own baton was then used to beat him over the head.

The fourteen Pismo Beach officers requested assistance from the sheriff's department and the police departments in Arroyo Grande, Grover City and San Luis Obispo. A pooled team of fifty officers quelled the situation by about 1:00 a.m. and effected 20 arrests. Police Chief Eldon Howard was quoted as saying, "I have never witnessed this attitude from the crowd in the street before".

Mattocks failed to arrive at Mattie's Restaurant at the usual time. A restaurant employee was sent to the home to check on him and discovered the body lying at the foot of a flight of stairs. Mattocks had been shot four times in the side, neck, chin and between the eyes with a .22 caliber automatic. He was found lying on his back with a white cloth neatly covering the facial wounds.

Officers searched the scene and interviewed all the residents on Placentia, Boeker, and Castaic streets. A description of two transients seen in the area was confirmed by several witnesses. A bulletin was quickly prepared and disseminated to all law enforcement agencies in the area and to the media.

Two suspects were arrested within 48 hours of the murder. Both were described as "hippie types" with long hair and beards. They were spotted in a Santa Maria pool hall and held until Pismo officers could respond. Police Chief Howard, Captain Ed Larrew, Sgt. Walter Smith and Officer J. Johnson were dispatched to Santa Maria and transported the two suspects to the San Luis Obispo County Jail for questioning. The pair were subsequently charged and convicted of the murder.

Chief Eldon Howard died after a lengthy battle against cancer on November 26, 1972. He was only 49 years old. Howard became a reserve officer in May 1957, and a full-time police officer in September of that year. In September 1962, Howard became the chief of police after the retirement of Amos Dana.

Uniforms took on a new look in 1974 under the direction of Chief James Keane. The department changed from dark blue shirt and pants to a distinct light blue shirt with black pockets and epaulets. The change was an effort to reduce the "offensiveness" perceived by public from officers in dark blue uniforms. Each officer was able to phase in the new shirts until December of 1974, when they became mandatory.

The police department was in shock when they learned that their chief of police had committed suicide on December 1, 1980. Faced with terminal cancer, Chief Herbert Lewis Eike took his own life in his Grover City home. He was born on May 11, 1926 in Burt, Iowa and had been the chief of police since 1978.

Lieutenant Gary Holt led the police department until a replacement for Williams was found. Duane G. Gansemer was selected as then next chief of police and took office on September 8, 1987.

The city was saddened by the loss of their chief of police on August 26, 1989. Duane Gansemer died of spinal cancer at the age of 52. He was respected as a true police professional with 26 years on the Los Angeles Police Department and nearly two years at the helm of Pismo Beach Police Department.

On January 16, 1990, the city swore in a new police chief. Brook J. McMahon took over command which was temporarily held by Lt. Gary Holt. McMahon came to Pismo Beach after eighteen years with the Glendale Police Department.

Pismo Beach police officers changed their uniforms effective July 1, 1990, under the direction of Chief McMahon. They returned to the more traditional dark blue shirt and pants. The uniforms in Pismo Beach are now the same as the other six city police departments in San Luis Obispo County.

In 1998 the police department moved its headquarters into a new state-of-the art facility which was constructed next door to the original City Hall building on 1000 Bello Street.

The department underwent an image update in 2006. Patrol vehicle graphics were given a full color ocean wave complete with pier rendered by local Pismo Beach artist, John Landon. The six-point star badge, which had been worn since the inception of the department, was changed to the shield badge, the shape more commonly used by police agencies.

After Chief Cortez’s retirement at the end of 2008, Jeffrey V. Norton was promoted to Chief of Police after serving as commander for approximately seven years. Chief Norton continued pursuing accreditation and oversaw the department's prestigious re-accreditation in 2013 which awarded the department accreditation with excellence. Chief Norton also reinstated the K9 program using all private donations to fund the program.

In August of 2014 Jake Miller promoted to Chief of Police. Jake Miller was the first chief to have promoted through every position within the Pismo Beach Police Department.

Today, the police department keeps pace with the changing needs of the community ensuring that the City of Pismo Beach is an enjoyable and safe place to live.