Create an Account - Increase your productivity, customize your experience, and engage in information you care about.

The City of Pismo Beach's budget is a fiscal plan with projected revenues and estimated costs to provide essential services to the public, including police services, fire prevention services, and maintenance of the City's streets, parks, and infrastructure. The City prepares a balanced biennual budget that incorporates community feedback, the Council's goals, and City staff's work plans to implement the Council's goals.  This budget is reviewed and updated periodically throughout the year.


The Budget In Brief is a summary of the FY 2017-18 and FY 2018-19 Adopted Budget, highlighting the budget process, Council goals, General Fund revenues and expenditures, major projects, staffing, and other high level information about the City's services.


The Adopted Budget documents provide a more in depth view of the budget, including historical analysis of key revenues, budgets and staffing levels for all funds and departments, fiscal policies, fund summaries, and more.  This document has historically earned awards from the Government Finance Officers Association and the California Society of Municipal Finance Officers for its transparency of government, serving as a key information piece for the City and its finances and operations.

The City of Pismo Beach is pleased to announce that the Administrative Services Department received the Government Finance Officers Association (GFOA) Distinguished Budget Presentation Award for the FY 2016 - FY 2019 Adopted Budgets.  This award is the highest form of recognition in governmental budgeting and represents a significant achievement for the City.  It reflects the commitment of the City Council and staff to meet the highest principles of governmental budgeting.  It is the first year in which the City has received this award.


In order to receive this award, the City budget must satisfy nationally recognized guidelines for effective budget presentation, including how well the the budget document serves as a policy document, a financial plan, an operations guide, and a communications device.


The GFOA is an international professional organization providing publications, training programs, services, and products designed to enhance the skills and performance of those responsible for government finance policy and management.  This is the only national awards program in governmental budgeting. 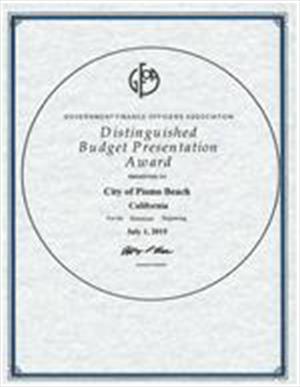 The City of Pismo Beach has been honored to receive the California Society of Municipal Finance Officers (CSMFO) Excellence in Budgeting Award for the fiscal year 2018, 2016, and 2014 budget document. It is the third year in which the City has received the Excellence Award.

The CSMFO Budget Awards Program is designed to recognize those agencies whose budget documents meet certain state-wide standards and requirements considered to be of the highest quality. The Excellence in Budgeting Award Program represents a significant accomplishment by a government and its leadership in meeting high standards and setting an example by encouraging others in their efforts to achieve and maintain an appropriate standard of excellence. Cities are eligible to submit an award annually, or biennially dependent on each City’s budget cycle. The City of Pismo Beach has received the Excellence in Budgeting Award for the second time this year, and has previously received the CSMFO Meritorious Budgeting Award for fiscal years 2000 (one-year budget), 2001 (one-year budget), 2002 and 2003 (biennial budget), and 2008 and 2009 (biennial budget).

Founded in 1957, the California Society of Municipal Finance Officers is California’s premier state-wide association serving all California municipal finance professionals, with Chapters located throughout the State. CSMFO promotes excellence in financial management through innovation, continuing education, and the professional development of its members. 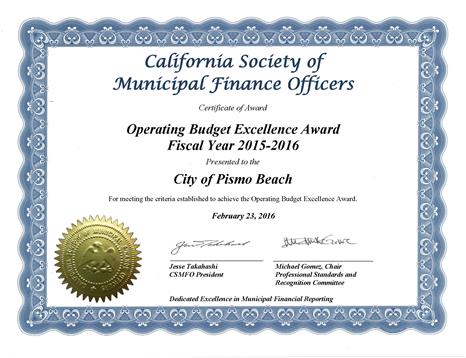